Working in the Hive 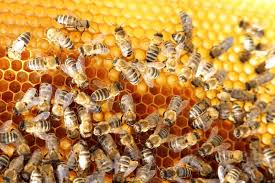 ‘Busy as a bee’ and ‘a hive of activity’ are two very common cliches often used to express the idea of continuous and productive working. The bee hive epitomises the ideal model for getting things done as a group, with clear roles and responsibilities, but also individual autonomy to get on and do what’s needed. The hive has long been held up as a model of social organisation from which human organisations can learn.

The key thing about hives is that they are flexible and adaptable. Bees cooperate and go to enormous lengths to deliver on the mission i.e. to nurture and protect the Queen bee and to ensure the ongoing health and well being of the hive through collecting and processing nectar into honey to feed the young. Hives are remarkable for their ability to organise seemingly random individuals and to respond to changing circumstances in the environment. The hive and its environment are not separate but are finely tuned interdependent entities working in collaboration for the greater good.

As a model for fostering collaboration and cooperation in human organisations, the hive can be used as a metaphor for taking a deliberate approach to arranging the skills in an organisation into communities who have strategic missions and who have been empowered to ‘do what it takes’ when threats such as a cyber attack occur. A hive is fully enabled to engage in spontaneous collaboration and decision making in real time at all levels and operates a model of constructs and principles that puts this real time collaboration at the core of the response to threats such as cyber attack.

This approach goes far beyond the usual ‘checklist’ approach to dealing with a cyber attack and turns a series of ‘business processes’ into a thriving living system that can respond, adapt and grow in real time. This means things can be dealt with at lightening speed in comparison to traditional structures. A hive structure can liberate employees from hierarchies and all the usual encumbrances that slow down effective working such as having to get permission from the boss, not being empowered to work across departmental lines, not being clear who is ‘entitled’ to make key decisions and having to wait to call and attend a meeting before anything can be agreed.

The key change in comparison to ‘usual’ environments is in how people interact. When an event occurs, people in a hive structure can spontaneously collaborate to take action in response to that event. This is an active, living response predicated on what is actually happening right now as opposed to a predefined set of scenarios with all the attendant checklists defining predetermined responses. This way of working may appear ‘untidy’ or even anarchic in comparison to the more formal ‘command and control’ structures, but when everyone has shared vision and values then trust and authenticity are established in way that allows the organisation to be truly resilient.

Building this type of hive structure is also possible not just as a response to immediate threats, but also as a natural day-to-day way of working. In this way an organisation can reconfigure itself and the way it works to adapt and thrive not only under cyber threat but under the wider strategic threats posed by the changes being brought by the fourth industrial revolution. Resilience comes from changing the paradigm and metaphor of the organisation from the mechanistic ‘machine’ where people are simply cogs in the machine to the metaphor of a living, thriving and productive living system such as the bee hive.